The Kloosterkerk is a monumental building, very much worthwhile visiting. On this website you will find a pagededicated to its history, but a leaflet in PDF-format is also available; it can serve as a guide while you are visiting our church. Volunteers will be at your disposal to give you a guided tour or answer your questions. The Apostle Chapel can offer you room for a prayer or meditation.

Besides picture postcards, a booklet about the history of the Kloosterkerk and a CD with recordings of the organ are available in the church.

For further information, feel free to contact the Church Office.

We would like to welcome you in the Kloosterkerk!

The history of the Kloosterkerk

The history of the Kloosterkerk starts around 1400 AD. In 1393 the land on which the present church has been built by Count Albrecht van Beieren (Count of Holland, Zealand and Hainaut), was donated to the St Andriesklooster in Amsterdam in order to build a monastery on it. In 1394, however, the people of the monastery sold the land to the lord van Arkel, who built a town castle on it. In those days many castles could be found in this area. At the end of the fourteenth century, however, all of them had been demolished. In 1401 the lord van Arkel came into conflict with Count Albrecht van Beieren. He had the lord’s entire property confiscated, including his castle, which was razed to the ground. This time the land was donated to the Dominican monks from Utrecht, who did built a monastery on it. The strong bonds between Margaretha van Kleef, wife of Count Albrecht, and this Dominican order played an important part in the allocation of the land. When she died, Margaretha van Kleef was buried in the Kloosterkerk. In 1420 a fierce blaze raged through the monastery.
The fact that the States of Holland kept their documents in the monastery for decades, indicates how big the building must have been. The church, however, was considerably smaller than it is today. It was enlarged around 1540 AD, some 140 years after it had been built. 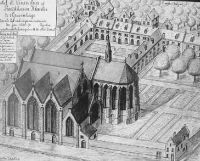 Until the end of the 16th century both the church and the monastery were used intensively. The onset of the Reformation was also the beginning of difficult times for the monks. During the Iconoclastic Fury on 25 August 1566 a lot of destruction and looting took place and the monks had to take refuge. A number of monks stayed behind to live in the monastery for a few more years, but in 1574 they left as well. The Geuzen took up their quarters in town.

In 1576 the States of Holland let the monastery to the magistrate of The Hague. They put it at the disposal of the St. Nicolaas Gasthuis without giving up the right of ownership. In 1583 most of the monastery was demolished. After being vacant for 12 years, the church had deteriorated. Suggestions were even made to tear it down. Fortunately, a letter from the town administration prevented this from happening. In 1588 a cavalry company was seeking shelter and settled in the former church. It became a stable. But it got even worse … In 1589 both the church and choir were made into a cannon foundry for the States of Holland and West Friesland. The choir was used as a foundry, the church served as a munition store. The church was walled off from the choir. On the right side of the church, you can still find the gate that gave entrance to the foundry. It was not until 1665 that a new artillery house was built on the outskirts of The Hague. On 3 November 1690 the ammunition stored in the church exploded and little remained of the monastery, except for one single wall. This wall still exists and is included in the new building of the Dutch Court of Audit. A part of the building had become church again in 1617 after contra remonstrants successfully squatted it. In 1625 Prince Frederik Hendrik married Amalia van Solms in the Kloosterkerk. After he was crowned King of England, Prince Willem III came to the Kloosterkerk in 1691. Around 1800 AD, when French armies entered The Hague, something completely different happened behind the church walls: a committee was established to replace the Stadholder’s family that had left for England.

As from the 17th century people were buried again in the church. It brought the church money as well as numerous hatchments. Most of the walls and columns were covered with these hatchments. The graves were predominantly put in the choir. It was here that they dug up lead coffins containing embalmed bodies. One of these bodies is presumed to have belonged to the foundress of the monastery, Margaretha van Kleef.

The then 16-year-old Queen Wilhelmina attended the Last Supper for the first time in 1896. The day before she was confirmed member of the Reformed Church at the Noordeinde palace.

After World War II the church made a fresh start. The Duinoord congregation was forced to look for another building: their church had been demolished by order of the occupying Germans. Rebuilding it appeared to be impossible and the congregation settled permanently in the Kloosterkerk. Between 1952 and 1957 the church was thoroughly renovated and much of the furniture of the old Duinoord church was moved to the Kloosterkerk: thus, a new use was found for the magnificent late 17th century pulpit, the Last Supper table and even the large mosaic. In 1957 the wall between the church and the renovated choir was removed and the crypt was restored. A new organ would do well in the renewed space and so, in 1966 the organ designed by Marcussen was put in use.

Many tombstones and hatchments have disappeared from the church over the years. During the latest restoration, however, some stones have been restored and new ones have been added.

In the church you will find a commemorative plaque for Jacob Cats which marks the place where this statesman and poet was buried on 17 November 1660. The Polish Daniel Gabriel Fahrenheit (1686-1736), who became famous after inventing the mercury thermometer, was also buried in the Kloosterkerk. He died in The Hague. In 2002 a bronze commemorative plaque was unveiled by the Polish ambassador.